According to the above-mentioned data from the research works of leading experts, as a rule, there are five – ten large companies at prefabricated construction and metal structures market, which occupy a considerable market share, and a large number of small companies.

This tendency is observed both at global and regional markets, for example:

In their research (GLOBALPREFABRICATEDCONSTRUCTIONMARKET 2016-2020), TechNavioanalysts determined the basic principles of competitive strategy at prefabricated construction and metal structures markets:

With the increasing adoption of green building practices, the market for prefabricated construction is expected to have a positive outlook in the coming years.

The growth of the construction market across the world has led several construction companies to focus increasingly on reducing their energy consumption levels.

The increasing use of prefabricated construction in smart cities is one of the recent trends propelling this market’s growth prospects. Smart cities provide a sustainable environment and as a result are becoming increasingly popular in many developed and developing countries. Buildings in such cities employ various technologies to improve the energy-efficiency of the whole system. Moreover, these technologies connect buildings to each other and the grid with the help of ICT-based devices and networks. Prefabricated construction is being widely used for the development of smart cities globally as it helps in waste management and in achieving energy efficiency.

Despite the dominance of the key vendors, there are a large number of small domestic vendors in the market that offer prefabricated building components. These vendors provide affordable solutions to SMEs and small construction companies and developers that engage mainly in small-scale residential development projects.

According to experts, this tendency will remain unchanged within the next few years: the world prefabricated construction(PFC)market will be developing in the maximum economy vector. Thus, all the demand priorities will transfer to the „representatives“ of material-saving technologies, such as high profiled-floorings, formed sections, BWW, light arched constructions, etc. This is reasonable, since the key advantage of such products is not only metal savings, but also resources, transportation and assembly expenses, which helps to reduce the time for construction.

As for the development of prefabricated construction market, experts agree that governmental programmes and infrastructure projects are one of the best ways to overcome economy recession, as long-term international experience confirms. It is a state program of economic development that became the first real step towards over coming crisis in many countries during depression years. An increase in volumes of state orders for infrastructure construction, projects devoted to the development of energy sector, sports facilities and reconstruction of social facilities, such as schools, hospitals, etc. can bring this industry sector back to life.

From the abovementioned, we can draw a conclusion about the main tendencies of the competitive environment:
– the competitive environment is clearly fragmented and all market players have a certain room;
– the market leaders constantly improve their competitiveness through the introduction of new technologies, including „green“ techs, aimed at reducing material and energy consumption and environmental impact;
– governmental programmes and infrastructure projects will become the main driving force of the market.

In this regard, one of the main factors of strengthening the positions at the market is a significant reduction of metal intensity. This allows achieving almost all of the above requirements, namely the reduction of:
– material consumption;
– energy consumption;
– production time;
– transportation and assembly expenses;
– environmental impact (emissions and production wastes).

By analyzing the official data of the market leaders (for example, Zamil Steel Source: http://www.zamilsteel.com/peb/en/default.asp?iId=GFJIJF), we can see that metal intensity of prefabricated constructions ranges from 56 kg/sq.m to 250 kg/sq.m at the average metal intensity of approximately 155 kg/sq.m.

Other manufacturers find themselves in the same situation, since they all use similar technologies and traditional elements for metal structures assembly (U-section, I-beam, structural tee, L-steel, etc.).

Technology presented in the Project is a revolutionary breakthrough at the market, as the use of BWW provides metal intensity of not more than 18.6 kg/sq.m, which is 3 (three) times less than the lowest figure of metal intensity of Zamil Steel.

As was said above, the presented Technology is almost waste less, and insignificant metal wastes can be easily disposed by sending to metallurgical plants for recycling.

Technology has no impact on the environment; aggressive and/or harmful substances and reagents do not apply during the production process; there is no water flow into open water sources; there are no harmful emissions into the atmosphere; there is no electromagnetic or any other radiation.

In addition, the application of this Technology can significantly reduce CO2 emissions into the atmosphere due to the essential cut of metal intensity of finished products compared with the traditional metal construction technologies.

It is known, that about 2 tons of CO2 emit into the atmosphere during the production of one ton of steel.

To illustrate BWW advantages, BWW-21 manufactured under Technology of six (6) meters long weighs only 53.4 kg (fifty-three kilograms four hundred grams). Thus, it can be normally lifted by two (and in some cases one) persons. 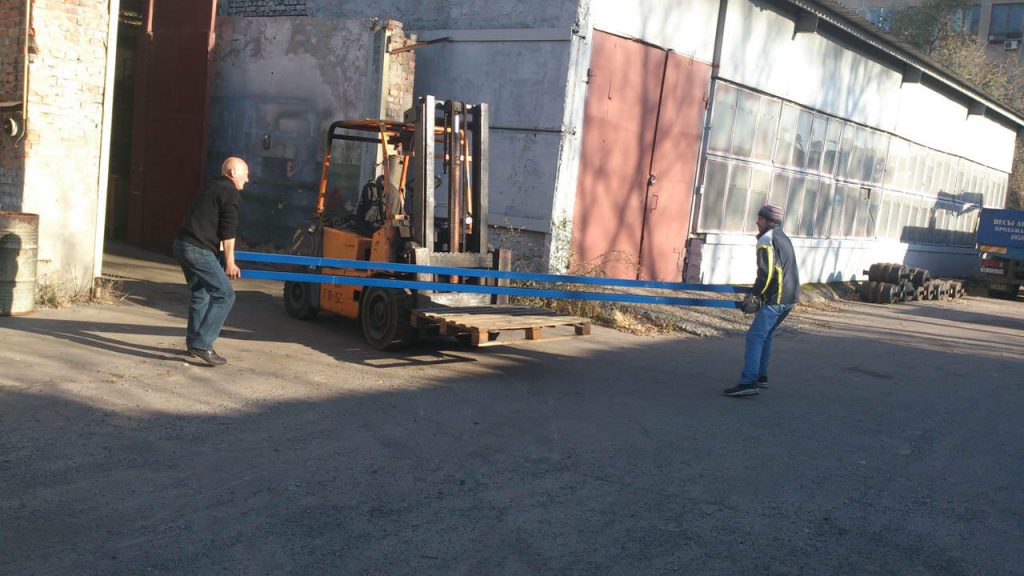 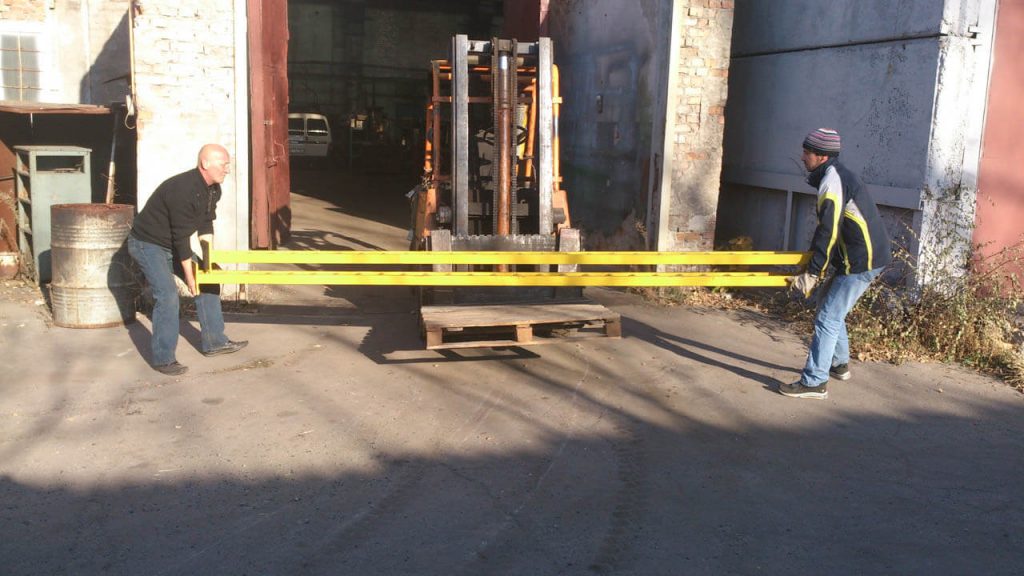 It is obvious that Technology has no rivals at the market.

However, it should be noted that the construction of an industrial complex manufacturing BWW will not cause the competition between the producers of metal constructions and PFC that operate at the market, but allow them to reach new quality level by applying BWW for metal structures assembly instead of traditional metal elements (U-section, I-beam, structural tee, L-steel, etc.).

Moreover, the cost of 1lm of BWW is just 15-20% more than the cost of traditional elements, while metal intensity is reduced several times.

As it was mentioned above, the construction of an industrial complex for BWW manufacture aims at providing large governmental infrastructure projects.

The best option is a cooperation of the industrial complex with several major manufacturers of metal structures, such as Kirby Building System, Zamil Steel and others.

This can be implemented on a long-term ongoing basis through the construction of an industrial complex on the basis of such manufacturers or on a contractual basis for the implementation of a particular infrastructure project.

At this, the best solution is the protectionism provided by the state through incorporating BWW application in the tender terms for the participation in an infrastructure project.

In this case everyone wins: the state gets the reduced project cost, budget funding, time for objects erection, impact on the environment (emissions and wastes) and creation of new work places to involve mainly local people; the contractor gets a great contract, profit, costs reduction and new technologies; the industrial complex gets a long-term and stable working load.

Sphere of application BWW technology can be greatly enhanced by involving the private sector and small customers.

The proposed marketing strategy is based on the following principles:

Central planning is implemented by creation of a single engineering and manufacturing center (EMC) in the Territory (the Territory, as a rule, means the territory of a certain country) by a natural person or legal entity, who/which as the buyer of equipment (BWW bar production line) obtains Know-How (BWW bar production method) License on the grounds of License Agreement.
Equipment Owner and Know-How License Holder through EMC can:
– carry out and control BWW bar production;
– protect the Licensor’s copyright in the Territory, including know-how royalty payment;
– ensure confidentiality concerning the Equipment and Know-How;
– sort out and accredit Regional Agents (representatives), supervise and control the activity of Regional Agents (representatives) by signing the relevant Agent agreements.

Integration is realized by introduction of Know-How into all segments of building industry in the Territory through Regional Agency Network to cover as many consumers as possible and create a new industry of quickly erectable buildings aimed at using BWW bar which is to become dominant in the Territory.
Accredited Regional Agents (representatives):
– create Regional network. Region usually means the territory of a certain administrative unit (district, state, department, etc.) within the Territory;
– perform all necessary actions and procedures to promote and introduce Know-How into the Region, namely: meet with potential consumers and architecture and design organizations, explaining specific features of Know-How and its competitive edge; run an active promotional campaign; etc.;
– create Order reception centers (points) where they do a preliminary cost estimate of an order (order means a quickly erectable building on a metal framing made with using BWW bar);
– negotiate with potential consumers and build a backlog of orders;
– cooperate in conclusion of agreements between the consumers and EMC.

Typification is put into practice by selection and/or development of typical structures in construction of quickly erectable buildings and narrowing down the whole variety of structures and elements to several types (typical elements, structures, ready-made architectural and design concepts) which can satisfy the needs of mass-market consumer in different combinations while meeting all consumer, technical, sanitary and ecological requirements.